A Brief Introduction to Japanese Etiquette and Culture

Japan is well known for their proper manners and consideration among others which they highly value. Though at some point, as the number of tourists increases, a lot of locals are continuously offended as some rules are not followed by foreigners, either consciously or unconsciously. That is why it is important to know at least the basic rules if you are planning to take a visit to Japan and here’s our list of things you must take note during your stay.

Most rules regarding the indoor manners in Japan are related to footwear. There is a clear line between the inside and outside areas of the home, where indoor and outdoor footwear are handled accordingly. These are not only applied on a Japanese home, but also in many traditional ryokan, restaurants, temples, castles and even historic buildings. 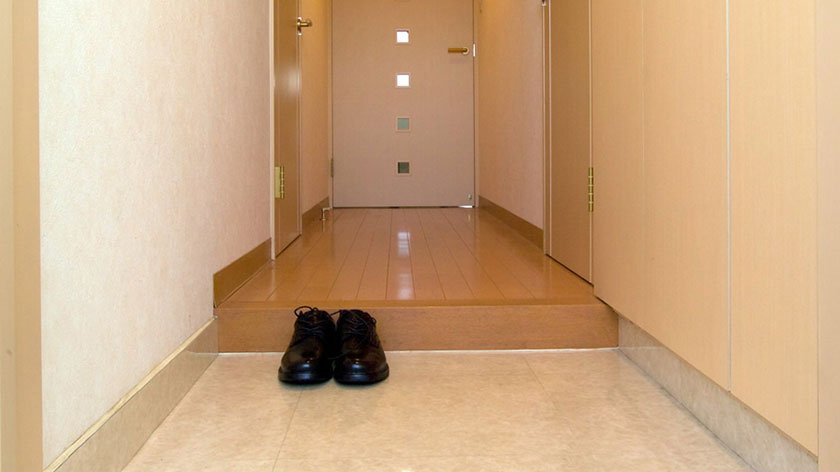 In Japanese homes, the border between inside and outside when it comes to footwear is not the door itself but the entrance area called genkan. It is typically divided into a lower and elevated area. It is important to remember not to step on the elevated area with your outdoor footwear and vice versa with socks which must not reach the lower area of the genkan. Lastly, turning your shoes to point towards the door after removing them is considered good manners in Japan. Slippers are usually provided by the host. In case you are not wearing socks, it is polite to bring a fresh pair of socks as it is not considered well mannered to enter someone’s house barefoot. Slippers can be freely worn indoors except when entering rooms with tatami floors. Remove them and place them neatly outside the said room. There’s also a separate pair of slippers for the use of washrooms which you must not forget to remove after usage.

Besides the genkan, it is advisable to carry wheeled suitcases in order to protect floors (especially inside tatami rooms) from dirt and damage. Be careful on placing your luggage on tatami mats and wooden floors. Some lodgings prefer luggage not to be placed onto tatami mats which is something you must be aware of.

Policies on indoor photography at tourist spots vary from place to place. Temples and shrines may prohibit taking of pictures inside worship halls, while the others do not allow flash photography or any type of photography, at all. Other tourist spots may not allow tripods, monopods and selfie sticks which is why it is a must to look for signs or kindly ask the staff in times of doubt.

Do not block passageways 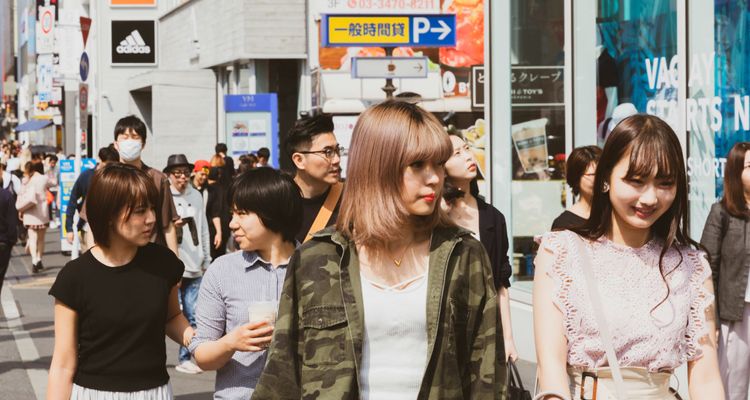 In Japan, it is important that you are not blocking passageways with yourself or your luggage. When waiting for others, move somewhere where you will not disturb the flow of traffic around you. Also, don’t loiter or sit on the floor.

Pedestrians on the left

This is more of an observation than a rule of good manner. Pedestrians in most countries tend to walk on the same side as they drive. In Japan, cars are usually driven on the left which is why it is recommended to walk on the left as you may bump into people rather than walking on the right side.

Carry your trash as you go

Once you visit Japan, you may notice that it is quite difficult to find garbage cans except on train stations and convenience stores. With this means, you are expected to carry your trash until you return to your hotel or home, or either find a garbage bin. Smokers are also expected to use portable ashtrays for the cigarette buds instead of littering.

This may be usual in some countries but not in Japan, where it is considered bad mannered. Sit down or at least stand in a place far from pedestrian traffic while enjoying a meal or snack. In this way, you can also avoid accidentally soiling food onto someone’s clothes or either cause litter. 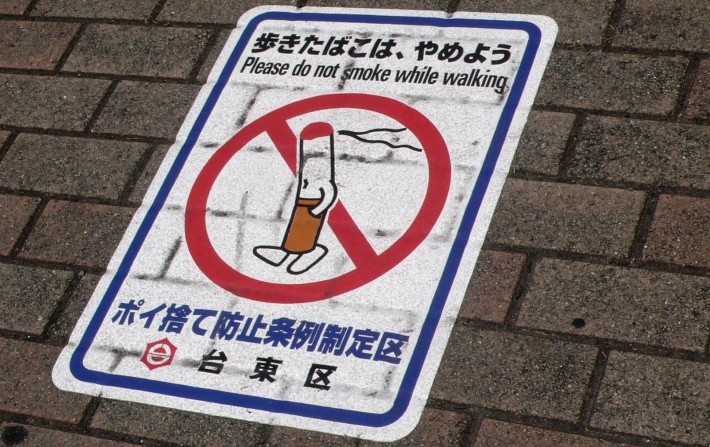 Smoking in crowded places is also considered highly inappropriate. In fact, it is prohibited in most city centers and is only allowed in designated smoking areas.

While the sight of couples holding hands are increasingly becoming a common view, kissing in public still remains to be highly inappropriate.

Almost everyone loves to take photos especially when visiting a tourist spot but Japan’s privacy laws with respect to taking photos is quite strict. In general, photos with recognizable faces must not be published without the consent of the people photographed. For hygienic purposes, it is also highly requested not to step on benches or places where people sit. Drones are also not allowed anywhere except when permission is obtained from authorities.

When passing through a Japanese restaurant, you may notice plastic or wax replicas of their dishes displayed in a window near their entrance. This is used to both entice and inform their patrons of their menu in an accurate, visual description. This can also be used by foreign tourists who can’t read and speak Japanese as they can easily point towards what they want to order. Upon entering, you may be welcomed with “Irasshaimase” which means “Welcome, please come in”.

Majority of the restaurants may provide Western style tables and chairs, while low traditional tables with cushions to sit on the floor which are also referred to as zashiki. Some restaurants may feature both styles where you may be asked which you would prefer. In case of zashiki style seating, shoes must be removed at the entrance before stepping onto the sitting area.

How to order and ways of eating 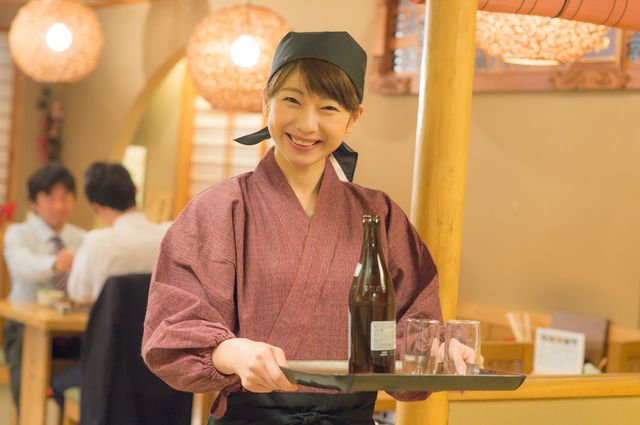 Once you are seated, you are usually served with a free glass of water or tea. If not served, it could be available for self service somewhere in the restaurant. A wet towel called oshibori is also given to clean your hands before eating. Chopsticks are also available on the table.

While many restaurants may provide illustrated menus, some usually just offer Japanese text based menus. If in doubt, you can ask for the recommendations (osusume) or the chef’s choice (omakase) which could often surprise you for good, prix fix style meals that you might actually like.

Once ready to order, signaling the restaurant staff can be done by saying “sumimasen” which means excuse me, or if available, there are call buttons at the table which you can press. After ordering, the order is repeated back to you for confirmation.

At some restaurants, ordering dishes and sharing it with a group is a common thing to do while other establishments, however, may require each diner to order individually. 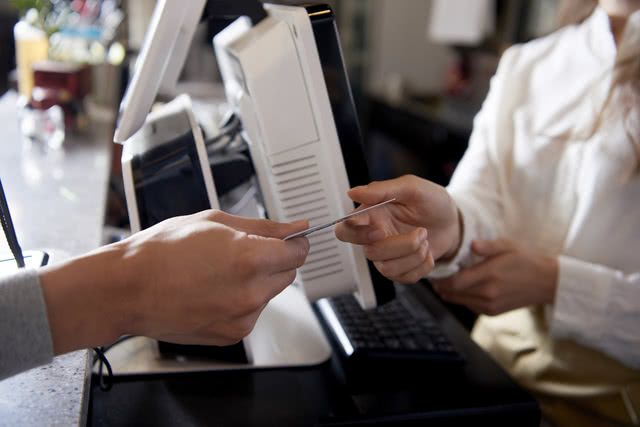 A bill faced down will be presented to you either as you receive the meal or after you finished it. In most restaurants, paying at the table is not common which is why you are supposed to bring your bill next to the cashier near the exit when leaving. Paying in cash is most common but an increasing number of restaurants are starting to accept credit cards or IC cards such as Suica.

Some restaurants, especially the cheap ones, may have a slightly different way to order and pay. Like in many ramen and gyudon restaurants where meal tickets are bought at a vending machine near the store’s entrance and is then presented to the staff who prepares and serves the meal afterwards.

You may be used to giving tips but in Japan, it is better to say “gochisosama deshita” which means “thank you for the meal” if you don’t want  to be chased by a staff who will return your money back.

Tables and ways of seating 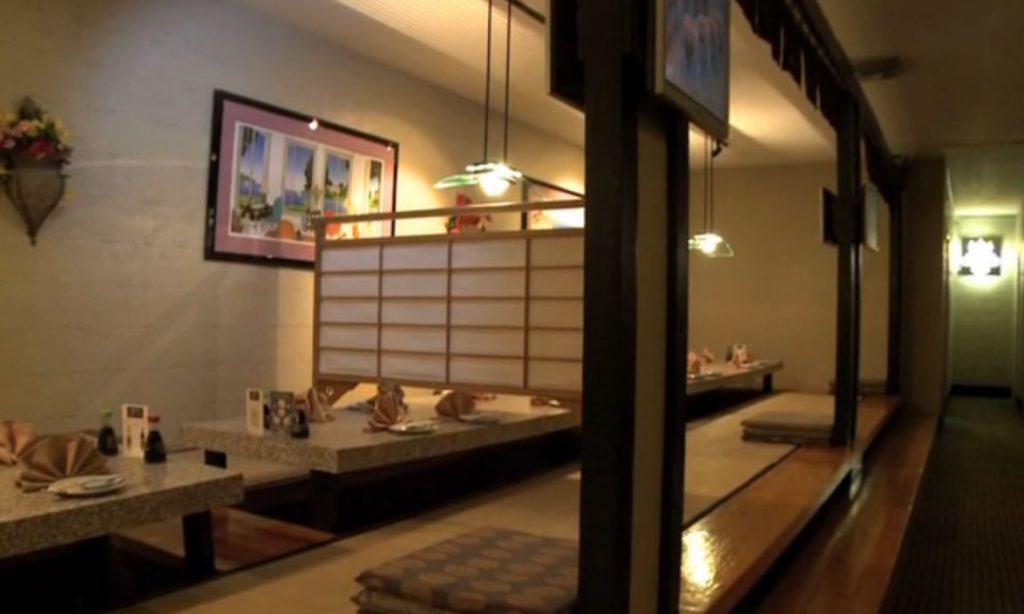 Some restaurants in Japan usually have low tables and cushions placed on a tatami floor instead or along with the Western-style chairs and tables. It is good manners to remove shoes and slippers before stepping onto tatami. Stepping on the cushions must be avoided as well. 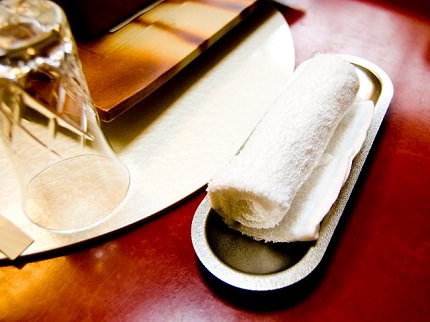 Most restaurants provide wet towels (oshibori) for cleaning of the hands before eating. If you have watched anime featuring Japanese people eating, you may have noticed how they say “itadakimasu” or “I gratefully receive” before starting the meal. If a dish that is better eaten right away is already served but the others on the table have not been served yet, useful phrases like “osaki ni dōzo” which means “please go ahead” or “osaki ni itadakimasu” as “allow me to start before you” can be used.

When eating in small bowls, it is the correct manner to pick up the bowl with your hand and lean it close to your mouth. On the other hand, larger types of dishes are generally not required to be picked up. With shared dishes, it is polite to use the opposite end of your chopsticks or dedicated serving chopsticks for moving food.

There are certain manners in the table which you must avoid like blowing off the nose, burping or audible munching. It is also generally a good manner to return all your dishes on how they are at the start of the meal. 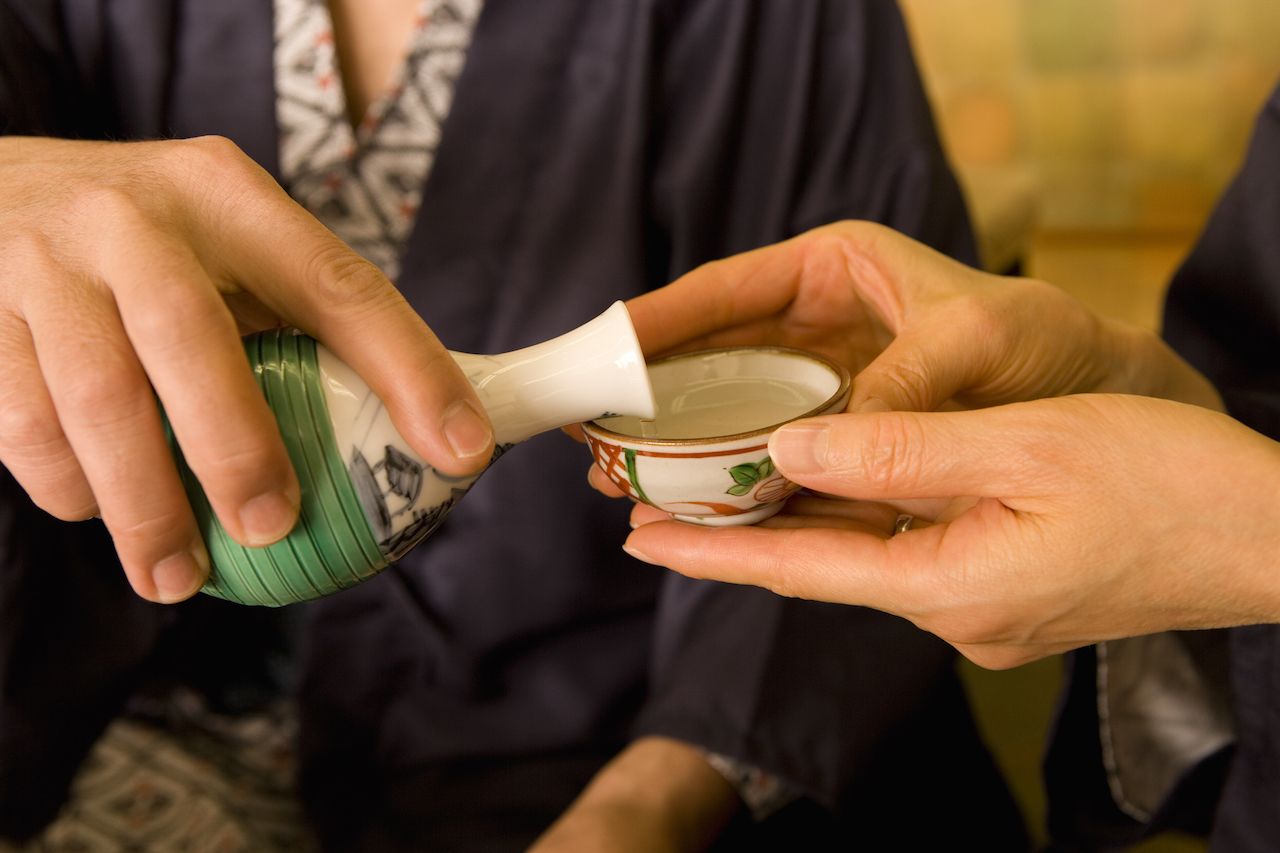 Wait until everybody at the table already has a drink and the glasses are raised for a drinking salute, which usually is “kampai“, before you start drinking. When drinking alcoholic beverages, it is customary to refill others’ cups, rather than pour your own drink. There are formal occasions where you must not obviously drink as well like in high-end restaurants that serve kaiseki ryori (Japanese haute cuisine). Above all else, if you do not drink alcohol, saying no is still an option. 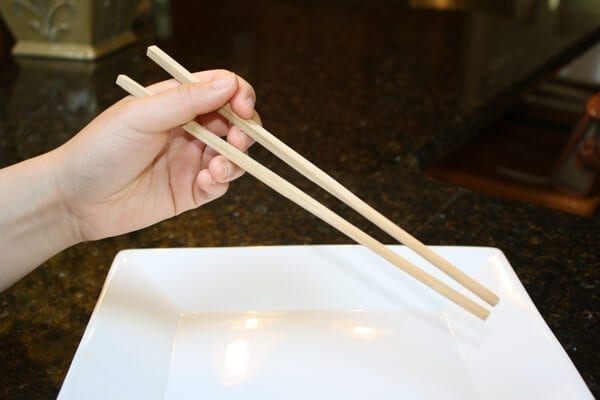 Chopsticks are commonly used along with traditional Japanese dishes. But there are some important rules to remember when dining with chopsticks like when you have already eaten with your chopsticks, you must now use the opposite end to take food from a shared plate. Spearing food, pointing and waving using your chopsticks are also considered bad manners. There’s a lot to know about how to properly use chopsticks which are something you must be aware of before dining in a Japanese restaurant.

In Japan, there are two types of toilets. One is the Western-style and of course, the Japanese-style. Some foreign visitors are sometimes culture shocked when entering this new toilets as they are built on the floor unusual from the usual western style, but here’s how you use Japanese-style toilets: 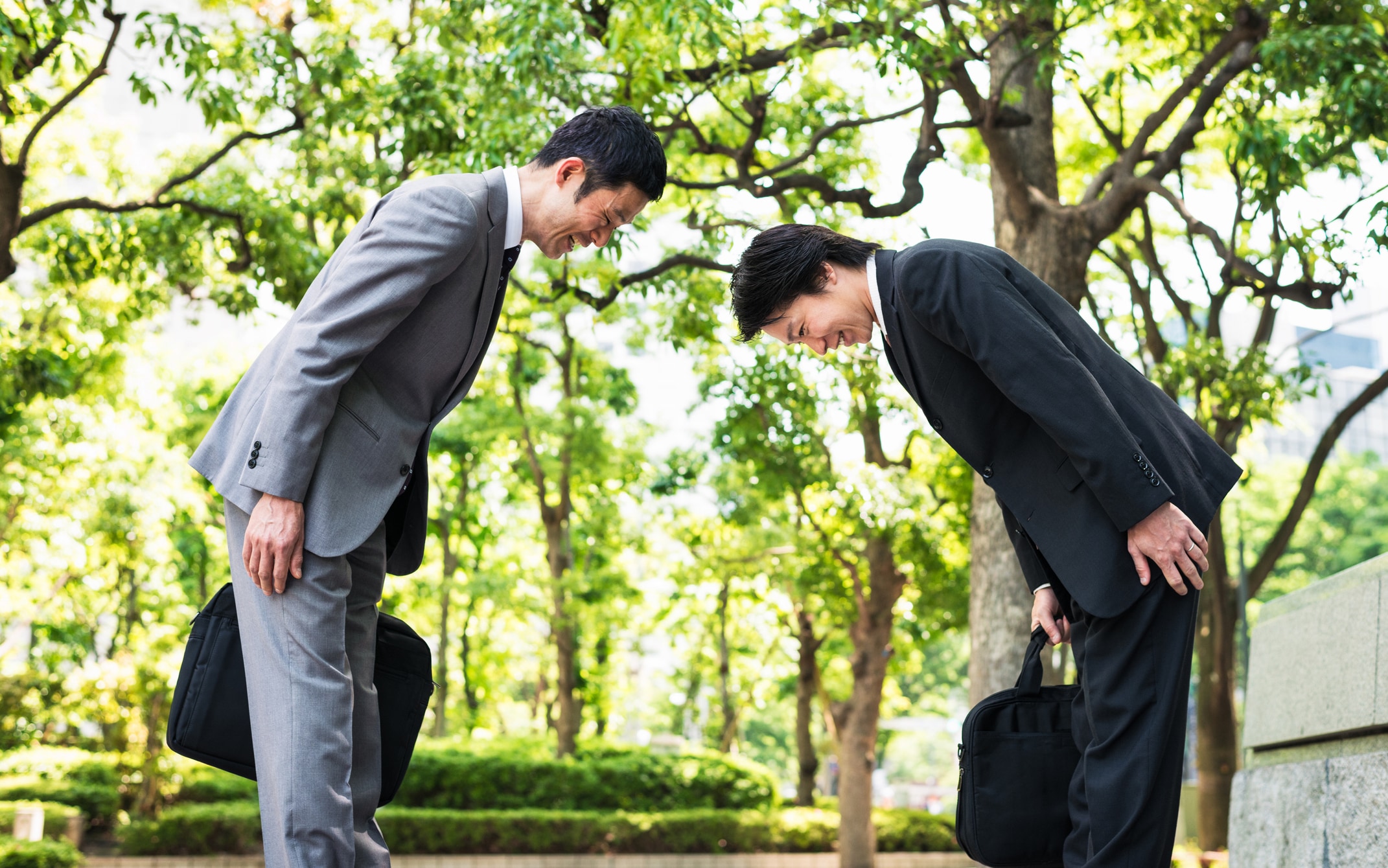 It is common to see the Japanese bowing as their way to greet each other. A bow may range from a small nod to a deep bend at the waist. The deeper, longer bow indicates a sign of respect while a small nod is for casual and informal. Greetings that take place on a tatami floor is done by getting on their knees to bow. At formal meetings, business cards can be exchanged as introductions.

Omiyage are souvenirs that you brought home from a trip while temiyage are presents that convey gratitude when visiting someone. Like in other countries, Japanese tourists also love to buy souvenirs as they visit different places.

Twice a year, in the month of June and December, it is common for co-workers, friends and relatives to exchange gifts that are usually worth 5000 yen that could be food, alcohol or other types of gifts. The gift giving seasons coincide with company employees receiving a special bonus in addition to their monthly salaries.

Gift giving on these occasions are not originally a part of the Japanese tradition. But due to the strong influences of the West, some families and friends have been continually exchanging gifts during these occasions.

There’s still a lot of basic rules you must know while you visit Japan like how names are formed and other customs. Stay tuned as we offer you more knowledge that could be useful for your journey.